The North Penn Goodwill Service, Inc. is a culmination of a dream of a group of Souderton firemen going back to March 1949.

On a very cold night, with near zero temperatures, Souderton firemen were called to assist Harleysville Fire Company at a house fire along Route 113 near Harleysville. Back at the firehouse, after cleaning their equipment, a group of firemen began discussing the need for a canteen service. Within a short time, a 1934 semi-retired school bus was secured from Hagey’s Bus Service, Franconia, on a “we’ll pay you when we get the money” basis. Some used equipment was secured through donations and other items were paid for as funds became available. 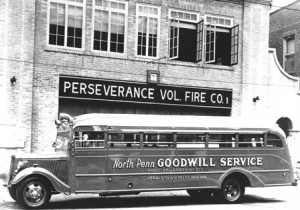 Our first call was answered on July 15, 1949, even though the canteen unit had not received their license tag. On that call, the unit was driven by Chief Paul Hunsberger, Souderton Police Depart- ment, so that no problems would be encountered. This first unit was admittedly quite Spartan–during the winter, water froze on the floor inside the bus and members thought they should wear ice skates to facilitate serving.

In January 1952, after a lengthy legal battle with a similar organization, a charter as a nonprofit corporation was secured and we began operations as a separate organization.

As finances permitted, other units were purchased and remodeled. First, a used transit bus from North Carolina was added. Later, another transit bus from Cincinnati, Ohio joined the fleet and a step-van from Philadelphia. As each unit was acquired and equipped, mistakes in design on a previous unit could be corrected and a standard operational design was developed.

One of the first major tests of our canteen service capabilities was demonstrated in 1955 as an aftermath of the floods along the Delaware River. In the first week, canteen service was provided to police, firemen, and rescue workers all along the Delaware River from Upper Black Eddy to Croyden. Later canteen units made daily trips to the Stroudsburg area assisting the Mennonite Disaster Service in their rehabilitation of flooded neighborhoods.

July 1972 brought the second major test of our resources in providing flood relief along the Schuylkill River. In the hard hit Pottstown area, our units were operating on a 24-hour basis for nearly 10 days feeding residents, rescue workers, police and firemen, cleanup personnel and utility crews.

After several years of operation, it was determined that step-vans proved to be more adaptable to our needs and could be designed for maximum efficiency. Two units were placed in service and these units featured grills, microwave ovens, refrigerators, insulated hot and cold thermos containers, loads of storage space, electric generators and “Stem-Lite” lighting systems which are capable of lighting an entire football field.

In June 1982, another major test was successfully completed during the K-Mart warehouse fire in Lower Bucks County. This disaster required 24-hour service for a period of 8 days. Our services were provided to 86 fire companies, which included nearly every fire and rescue company in Upper and Lower Bucks County, as well as many companies from New Jersey.

A shelter unit was placed into service in April 1981 to allow firemen and workers to relax and warm-up in extreme weather conditions. This unit is also equipped with a marine-type chemical toilet to provide further relief for emergency personnel. Another canteen unit was added in 1983, making available three first-responder, fully-equipped canteen units.

On June 28, 1998, we survived another test of our proficiency at the Perkasie, Pennsylvania, downtown business area fire. During a 3 ½-day period, 62 fire companies from many different communities received extended services. Other extensive calls in more recent years include the Norristown State Hospital hostage situation in June 1999 with 144 man-hours and the Bridgeport Industrial Park fire May 15-18, 2001 where fire companies from Montgomery, Bucks and Delaware counties were served with over 200 man-hours extended.

In 1993, ground was leased from the Perseverance (Souderton) Volunteer Fire Company to add a 3-bay garage to their existing building across the street from our headquarters. A local general contractor, Roger M. Koffel, began construction and by using fast-time construction and cooperation from subcontractors, the building was finished in record time. In appreciation for a Legislative Initiative grant of $5,000 to begin construction, the new building was named the “Senator Ed Holl Annex.”

Currently, all Units are equipped with complete two-way radio systems for Montgomery, Bucks, Chester, Lehigh, Northampton and Delaware County Fire Radio systems and an extensive network of police, ambulance and other emergency frequencies. Cellular telephone capability has also been provided. 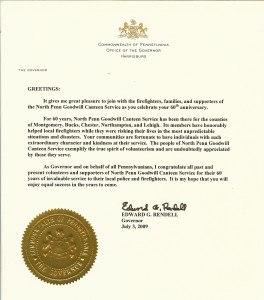 2009 marked 60 years of active service and we were pleased to be given citations from both the House of Representatives and the Senate recognizing our longevity of serving others.

It is now almost 2015 and we’ve upgraded some of our equipment to accommodate modern times including stainless steel interior on the primary canteen, self-serve coffee and hot water. A second unit was recently modernized, replacing a PTO with a generator and the interior redone with stainless steel. Our oldest unit is in the midst of having a very expensive coffee urn replaced which, thanks to donations, will not affect the funds we have available for call supplies. If you would like to see more pictures, click on our Facebook page to the right.

We are proud to be able to serve those who serve others!